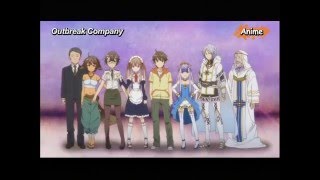 Shinichi Kanou is a shut-in otaku with a vast knowledge of anime, manga, and video games. One day, after applying for a job in hopes of escaping his secluded lifestyle, he is kidnapped and transported to the Eldant Empire—a fantasy world filled with elves, dragons, and dwarves. Trapped in this strange land, Shinichi is given an unlikely task by the Japanese government: to spread otaku culture across the realm by becoming an "Otaku Missionary."

To accomplish his mission, Shinichi has the full support of the Japanese government, as well as the half-elf maid Myucel and Princess Petralka of the Eldant Empire. Together with this ragtag bunch, he will overcome the obstacles of politics, social classes, and ethnic discrimination to promote the ways of the otaku in this holy land.