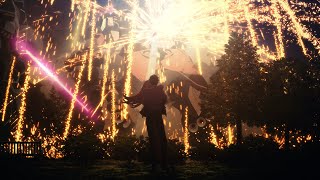 —Do you know the Nejen?
If you know it, then I'll take you there—

The year is U.C. 0105. Twelve years have passed since the end of the second Neo Zeon War (Char's Rebellion). Even after "the Axis Shock," which seemed to indicate the future of humanity and the Universal Century, the world is still in a chaotic situation where intermittent military conflicts continue to break out. The Earth Federation government is more corrupt than ever, and its leadership has not only accelerated Earth's pollution, but also implemented an inhuman "Man Hunting" policy in which civilians are forcibly exiled to outer space.

The person who calls himself "Mafty" and leads this organization is Hathaway Noa, the son of Bright Noa, an officer of the Earth Federation Forces who once participated in the One Year War. Hathaway himself joined the forces trying to stop Char’s Rebellion. With firsthand knowledge of the ideals and ideologies of Amuro Ray and Char Aznable, he has become a warrior following in their footsteps, and plans to clear a path forward through armed resistance. His destiny, however, is drastically altered as he encounters the Federation Forces officer Kenneth Sleg and a mysterious young beauty named Gigi Andalucia.