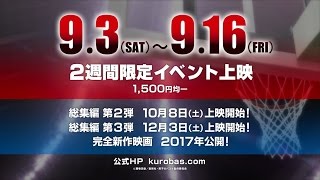 Third of three compilation films of the Kuroko no Basket franchise.

Rakuzan and Shutoku face off in the semi finals at the Winter Cup. Despite struggling with Akashi's Emperor Eye that sees through everything, Midorima and Takao fight back with their consecutive plays, and the whole Shutoku team bites back at Rakuzan. However, it doesn't take long before Akashi crushes all of their hopes. It is decided that the finals will be fought between Seirin and Rakuzan. Kagami immediately enters the Zone as soon as the match starts, but it is no match for Akashi. Facing an extreme difference in ability against Rakuzan, Seirin loses their hope a number of times during the match. However, Kuroko doesn't give up, and continues to strongly fight against Akashi.