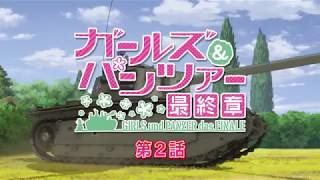 Despite having the upper hand, BC Freedom High School suffers a thorough defeat at the hands of Ooarai Girls Academy. Following their victory, the Ooarai girls decide to take a break before the next round. After discovering that Momo Kawashima is taking care of her family while studying for the university entrance exams, the rest of the Ooarai team become more determined to win the Winter Continuous Track Cup for the sake of Momo and her family.

Meanwhile, the second round of the tournament has started, and Ooarai now has to face Chi-Ha-Tan Academy. Having learned from the first round to not underestimate their enemies, Ooarai slowly approaches their opponent on the thick jungle battlefield.

Despite their best attempts to be cautious, Ooarai is immediately put in a difficult situation as Chi-Ha-Tan employs several new strategies devised by Haru Fukuda. Finding themselves between a rock and a hard place, Ooarai must claw their way out to claim another comeback victory and keep their championship hopes alive.