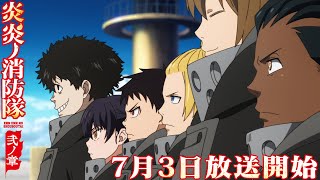 When Shinra Kusakabe joined Special Fire Force Company 8, he wanted to use his gifts as a Third Generation Pyromancer to help save people from the ever present threat of spontaneous combustion, fight the Infernals that spontaneous combustion victims have been transforming into, and discover a way to end his world's fiery nightmare for good. Ever since beginning their war against the nefarious forces of the so-called Evangelist, Company 8 has unearthed world-shaking secrets that make Shinra's mission even more critical. There are double-agents everywhere in the Fire Force, for one, and Shinra has also learned that his brother and mother, who he thought long dead in an Infernal's blaze, are also agents of the Evangelist. With the fight more personal than ever, Shinra has vowed to not only end spontaneous combustion once and for all, but to find a way save Infernals, including his mother, from their monstrous fates.