Born from the corpse of his mother, a young mercenary known only as Guts, embraces the battlefield as his only means of survival. Day in and day out, putting his life on the line just to make enough to get by, he moves from one bloodshed to the next.
After a run-in with the Band of the Hawk, a formidable troop of mercenaries, Guts is recruited by their charismatic leader Griffith, nicknamed the "White Hawk." As he quickly climbed the ranks in order to become the head of the offensive faction, Guts proves to be a mighty addition to Griffith's force, taking Midland by storm. However, while the band's quest for recognition continues, Guts slowly realizes that the world is not as black-and-white as he once assumed.
Set in the medieval era, Kenpuu Denki Berserk is a dark, gritty tale that follows one man's struggle to find his own path, while supporting another's lust for power, and the unimaginable tragedy that begins to turn the wheels of fate. 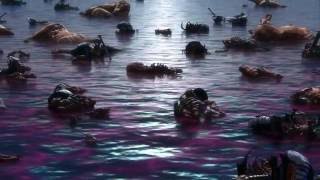 This review is based purely on the Berserk anime series [have not read its manga & maybe someday will...] and after finishing it we have to say its an anime series that you have to watch!! Note this review is for anime lovers "who are here on hunt for a good anime & have not read its manga or dont have time to read its manga now & maybe will simply move on to the next anime if they didnot know about Berserk..." and for those who have read its manga,know its awesomeness & are here to bathe into some more of the Berserk's brilliance but have some doubts... Coming to the anime review, Its story is powerful ,dark themed,intricate,well done with many plot twists,thrills,suspense & literally lots of adrenaline packed action fights *clang* *clang*. It ends up eliciting such a wide range of emotions. And so is the impact of the characters too powerful in the sense that it feels almost so perfect...Note that this anime has lot of gore [graphic violence]. The seiyuu voices,op/eds,osts are at their best . Please Watch it in English Subbed Only [i.e. Japanese audio version] , that way you will enjoy it to its fullest. Season 1 aired in 1998 & despite the somewhat old animation art it still felt awesome watching it. Its animation art will not decrease your level of enjoyment of the series. Season 2 [i.e. 2016] bluray & Season 3 [i.e. 2017] tv have new animation art with 3dcgi in it . Now we have seen a lot of hate for its 3d cgi over the forums but know that atleast it got an anime adaptation of 2 new seasons so be grateful for it. So many good manga are choking in dust who have not got any anime adaptations since many eons...It never felt that the 3d cgi decreased the enjoyment level except for few scenes which you can ignore for the sake of the anime & move on. There is a saying about use of 3d cgi in anime that you either love it or hate it . If you are one of those adamant folks who want to stay on the 3d cgi HATE train forever you are more than welcome but know that not only will you miss this anime but also a lot of other awesome anime out there... Berserk manga getting an anime in whatever form it maybe is one of the best things that can happen in anime world & we never know if it will ever get a so-called noteworthy remake living upto 100% of its manga expectations in like next 50 years or so but what we have now is 3 seasons spanning over 50 episodes & 3 movies which is worthy of us anime fans love & we hope that this will get you into the awesomeness of the radiant Berserk universe if you have yet to start with the Berserk anime !!!